In elite sport, a 1% competitive edge can be the difference between winning and losing. While high performance coaches seek to optimise athlete conditioning and preparation, maintaining adequate hydration remains a barrier to peak performance. A 2.5% bodyweight loss from dehydration (which is common in many sports) has been shown to impair cycling sprint performance by 29% (Ebert et al 2007), and even a fluid deficit as low as 1.6% can slow running performance by 7% (Armstrong et al 1985). Despite the crucial role of hydration in performance, hydration products have remained largely unchanged for over fifty years. Based on best-practice science for rehydration in medical settings, many sports and electrolyte drinks actually contain too much sugar for optimal rehydration and only use part of the body’s fluid absorption potential.

However, ground-breaking research between Flinders and Yale Universities was able to identify a unique resistant starch, which was able to demonstrate a 39% improvement in hydration and health outcomes in a medical setting (Ramakrishna et al 2000). After adapting these medical formulations for the fluid loss needs of athletes (now the PREPD hydration system), a clinical trial was conducted between Flinders University and the Adelaide Football Club (Adelaide Crows) to test whether PREPD could boost the impact of normal hydration practice in elite AFL football players.

A randomised controlled trial was undertaken during summer pre-season training with 27 players over four days using a cross-over design (each player had two days using PREPD + normal hydration and then two days with normal hydration only). In the “PREPD” arm of the trial, players consumed a resistant starch preload (now PREPD Prime) the evening prior to training and a sports oral rehydration solution with resistant starch (now PREPD Recover) near the end of training until one hour into recovery. The primary clinical hydration markers were body weight and hematocrit (a measure of blood thickness which is higher when dehydrated) with measurements taken pre-training, post-training (90 min), and at end of recovery (30–60 min later). Statistical analysis was performed to determine whether the athletes were better hydrated when they used PREPD compared with their normal hydration routine only.

Hematocrit: A measure of blood thickness. As an athlete becomes dehydrated their blood becomes thicker (increasing their hematocrit) and the heart needs to work harder to pump it around the body. A lower haematocrit reading means more fluid is present in the blood indicating less dehydration. 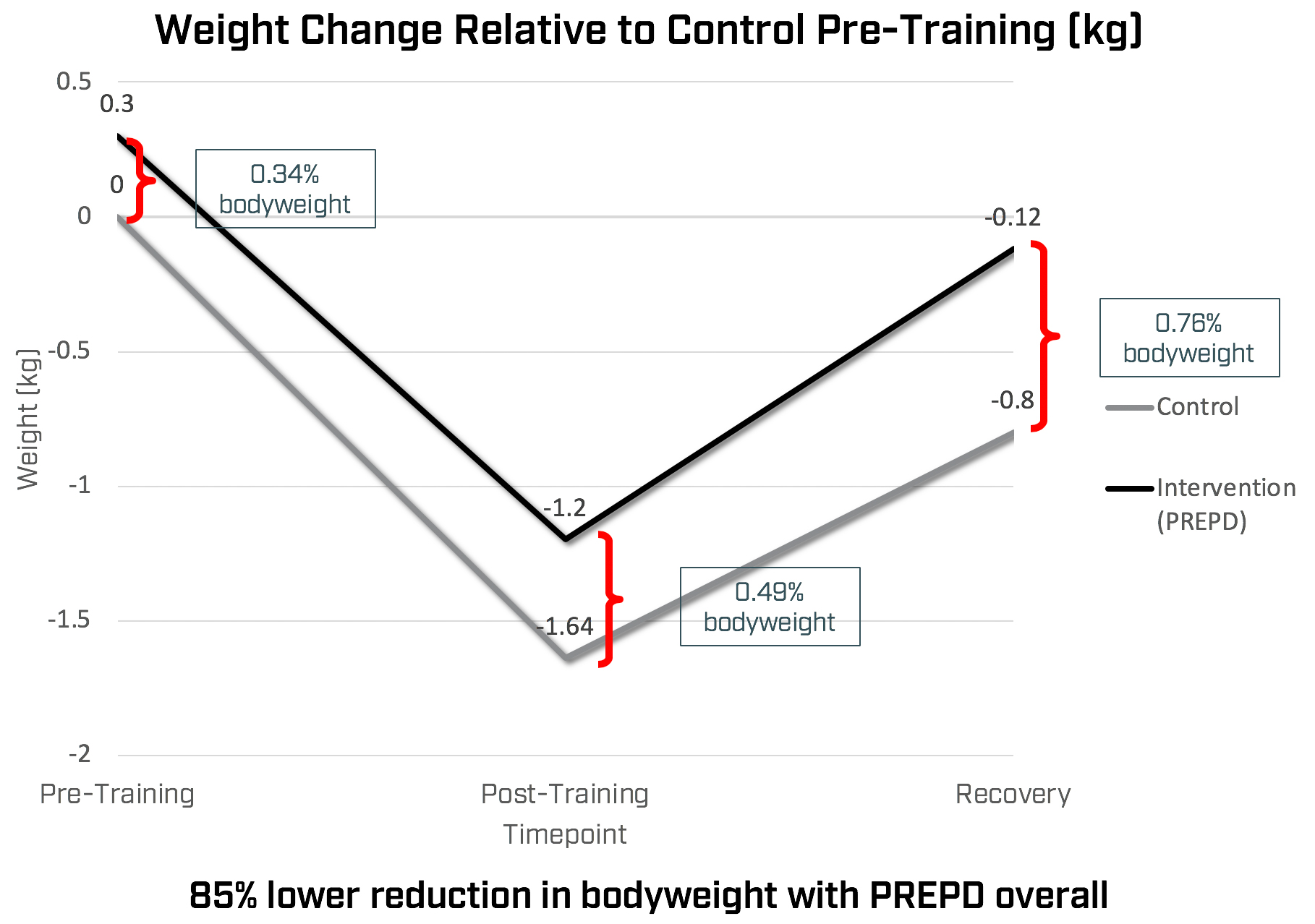 The effects of PREPD on hydration measures indicates better hydration before, immediately after and 1 hour after training. According to Accredited Sports Dietitian, Anthony Meade, “Given that 2% dehydration in bodyweight loss leads to decreased performance, the benefits demonstrated by PREPD clearly enhances best practice hydration and is ultimately very likely to improve athletic performance.”

The full publication in the Journal of the International Society of Sports Nutrition can be viewed here.